Snowplow Drivers in Western States in Short Supply This Year 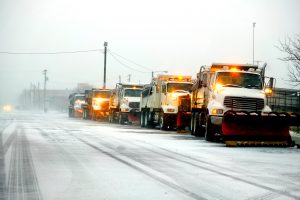 Snowplow Drivers in Western States in Short Supply This Year

Recommendations Made to Increase Numbers and Improve Public Safety

(Washington, DC) A national transportation group is warning that Americans across the country will likely face long delays this winter as states struggle to find enough snowplow drivers.

“State transportation officials have repeatedly told us they simply can’t fill many driver positions. In fact, one official recently said he needs 140 new snowplow drivers but due to low wages and other concerns he is having trouble hiring anyone,” said Doug Anderson, the Utah-based incoming chairman of the National Coalition for Open Roads (NCFOR).

The organization was formed two years ago to advocate for cost-effective winter road maintenance practices to ensure roads remain open and safe. According to Indeed.com, the average wage for snowplow drivers is over $25 an hour, but for most state-run transportation departments in western states the starting wage is just $19 an hour.

“That’s simply not competitive, especially when many fast-food places are offering close to similar pay. In one ski resort community, we’ve been told that dishwashers are being paid $26 an hour,” said Roger Knoph, the current chairman of the NCFOR board, who lives in Colorado.

Many transportation departments have begun high school-focused recruiting efforts after states lowered the minimum age to drive a snowplow to 18 years of age. Several state governments have recently begun paying thousands of dollars for the training needed to help the new drivers qualify for a Commercial Driver’s License (CDL) required to operate a large vehicle and plow roads.

“States wouldn’t even consider hiring anyone without a CDL license just a few years ago.  Now they are accepting just about anyone,” Anderson said.  “The downside is that once they get that commercial license, some of the new hires are leaving for much higher paying jobs.”

There is another step the trade association recommends.

“One official told us that one the biggest problems they have with hiring new snowplow drivers is a requirement that all state employees be vaccinated for Covid.  Now that the Covid has waned, we think removing the vaccine requirement would bring added safety to the public by bringing on more snowplow drivers to keep our roads safe,” said Peter Novak, another member of the board.

"One official recently told he needs 140 new snowplow drivers but due to low wages and other concerns he is having trouble hiring anyone."

According to the U.S. Department of Transportation’s Federal Highway Administration, data from 2007 through 2016 found that snow and slushy roads contributed to 562,182 crashes, 138,735 injuries, and over 1,700 deaths.

“We want elected officials to recognize that the underfunding of winter highway maintenance means lives lost and sometimes horrible injuries.  The cost to business is also significant.  A single day of roads closed due to snow can cost companies millions of dollars in lost revenue,” said Rhett Roberts, a founding member of the coalition.

The National Coalition for Open Roads (NCFOR) was formed in 2020 to advocate for the most responsible policies and cost-effective winter road maintenance practices to ensure that the nation’s winter roads remain open and safe. ​ It has offices in Washington DC and Utah.

NEWS-RELEASE-Snowplow-Drivers-in-Short-Supply-This-Year-FINAL1604Download
You can share this story by using your social accounts: